Quarterly thoughts is back for a second instalment, as we share our favourite things from the worlds of branding, creativity and tech.

I bought the most recent issue of Sabat Magazine a couple of weeks ago and haven’t stopped raving about it to everyone who could possibly be interested in a magazine trio dedicated to witchcraft. It’s also the most beautiful publication I’ve ever laid eyes on – every page is well considered and full of surprises, it’s incredible.

Narrow Design is a creative break from the normal page format based on the golden ratio. Nick Jones highlights how the web is no longer limited to the layouts of yesteryear and truly is a medium unto its own, challenging us to break out of the constraints adopted from the world of print-based media.

We were delighted to host our second masterclass for National Saturday Club in March, when students from the Cornwall College Saturday Club visited us here in Hayle. The workshop focused on typography, starting with a short illustrated talk about its role within design and communication. Each student picked a letter out of a hat and began to sketch their ideas. We then scanned the illustrations and transformed them into a working digital typeface that anyone can use. The final work was displayed at the National Saturday Club Show held at Somerset House in London during June.

I really like this short video chronicling the history of the Futura typeface and how it overcame a lot (including being adopted by the Nazis) to become the modern, slick and widely used font we see today. I also think it’s a testament to designer Paul Renner that a font designed in 1927 still looks so modern.

During David Bowie’s Grammy tribute last year, Lady Gaga’s performance featured the use of projection-mapping techniques, transforming her face into a canvas of digital art. The studio behind her performance has created another visual experiment to demonstrate the improved pace and precision of their system.

INORI (translates to ‘prayer’ in Japanese) is a collaboration between visual studio WOW, production company TOKYO, Ishikawa Watanabe Lab at the University of Tokyo and Japanese dance duo AyaBambi.

The new projector runs at 1,000 frames per second, with 3D mapping and 2D tracking that has less than ten milliseconds delay to match the face and hand movements of AyaBambi’s performance, opening up a world of visual possibilities for performance art.

Marks & Spencer has started laser-labelling avocados. It’s an interesting and innovative approach to producing packaging that displays salient information, reduces waste and is environmentally friendly. I also really love the laser-etch effect, and with us having designed some laser-engraved wood pieces for clients in the past, it’s fun to see it on a different material and read the challenges that this has thrown up.

On a Thursday evening in Potager I found myself around a fire toasting marshmallows and eating dinner out of a wood-burning filing cabinet (no, really). A series of talks from entrepreneurs, opportunists, survivors and explorers inspired me beyond the realms of design and really put life into perspective. Firelight by the good folks at Stranger caught my imagination and got me thinking about out-of-work activities to keep the creativity flowing.

You may have heard a few famous geeks (Stephen Hawking, Bill Gates et al) recently throwing in their two penn’orth on the subject of artificial intelligence and specifically the risks associated with computers that can truly think for themselves. Much like global warming, I think this is a debate everyone can and should join in on. If you gleaned most of your knowledge of AI from the film Terminator 2, Computerphile have a great series of thought-provoking ten-minute interviews to ease you in. Think of it as ‘AI for the rest of us’. Watch the first couple and I promise you will want to watch the rest.

As a big fan of the TV series Westworld, I found it very interesting to read an interview with the User Interface (UI) Designer and find out what his inspiration was for creating the interfaces. It’s also quite fascinating to see the different processes behind designing, such as reverse engineering UIs based on actors’ random gestures on the screen.

I’m easily swayed by packaging. There’s no exact formula to what makes something catch my eye, but show me a cool font, some bright colours and imagery and you’ll have my attention. And, contents eaten, I usually try and find a use for the more colourful ones.

Original packaging from the past is always a pleasure to discover and the studio has some great finds on display. One group that shares my passion is Purveyors of Packaging. They document each vintage packaging find on their Instagram account. They don’t have any criteria other than a combination of interesting typography, colour palette and imagery that just works.

I’ve taken my very British obsession with weather online and realised that we have it easy compared to the rest of the world... Here you can see wind speed, temperature and direction across the globe, while here you can find a map showing live lightning strikes.

The 'I Voted' sticker competition run by the New York City Campaign Finance Board had a great starting point, getting people interested in politics. The winning sticker works amazingly well, showing the subway map and how they all link together, creating a sense of unity across the city despite the apparent divides.

Last year, Boston-based group Mass Poetry put together a project called Raining Poetry, in which they stencilled poems around the city with a biodegradable, water-resistant spray. I like the idea of someone hurrying head down through the rain, then stopping when they see a secret verse revealed on the pavement. The world needs more poetry. 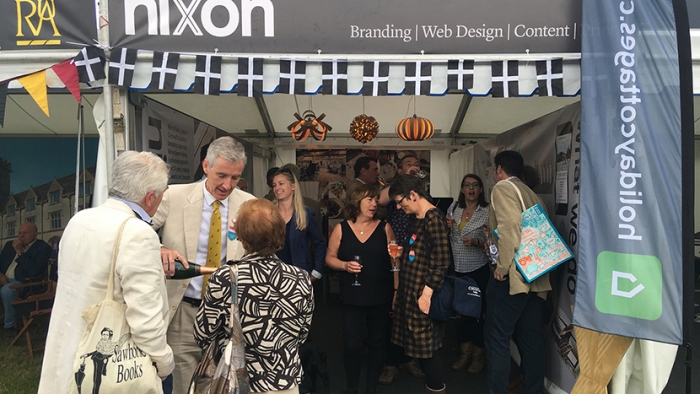