Once again we’re opening up our magic box of quarterly thoughts, giving you a peek into our email inboxes, browser bookmarks and all the cool things we’ve seen.

For World Oceans Day, Corona ‘hijacked’ its own advertising campaign to highlight marine plastic pollution. As part of the campaign, they commissioned a special Hawaiian shirt, made from plastic fished from the ocean, and built installations in London, Australia, the Dominican Republic and Colombia of life-size waves made from real plastic waste. London's towering roller of discarded bottles, bags and other non-biodegradable rubbish confronts passers-by with a physical demonstration of our current plastic crisis that they can’t ignore.

Thomas Dambo is an artist who can see the great potential in items that people throw out.

Dambo originally trained as a carpenter but found the work repetitive. He wanted more creativity and excitement, and so applied to Design School Kolding. During his time at Kolding, Dambo noticed the huge piles of plywood thrown away by construction sites on a daily basis. This wastefulness sparked his first major street-art project: Happy City Birds. So far he’s built over 3,000 birdhouses and installed them in cities around the world.

A beautiful art-directed article on the quirks of dealing with time when coding.

I recently stumbled upon 19 Crimes wine at my local shop and found myself immersed – literally – in the world of living wine labels. In a nutshell, this brings augmented reality to wine, meaning your cheeky glass of red can now sit alongside an interesting story. Every 19 Crimes bottle features the picture of a convict on its label (the brand is built around the theme of transportation), and by downloading the Living Wine Labels app and focusing your phone’s camera on the picture, you can see (and hear) the convict come to life. It’s a little bit gimmicky, but it’s great fun.

I first encountered John and Frances Sorrell when working in London in the mid 1980s. When they successfully sold their design agency Newell & Sorrell in 2000, they could’ve opted for sunshine and early retirement. Instead, they founded The Sorrell Foundation, with an aim to inspire creativity in young people. Driven by their own experiences of attending Saturday art classes, which were common from the late ’40s to the ’70s and gave teenagers a taste of what it would be like to study art after leaving school, they decided to emulate this model for the 21st century and created the National Art&Design Saturday Club.

Now in it’s ninth year, the club celebrates its success at the annual Summer Show at Somerset House. I went along to the opening night on 9 June and as ever was bowled over by the diversity, energy and creativity of the work on show from the 1,500 students enjoying free Saturday morning classes at their local art college.

After seven months (and counting) on the biggest rebrand and packaging relaunch we’ve ever undertaken at Nixon, it got me thinking about both the conscious and unconscious decisions we make as buyers every day. Our designs went through several rounds of neuro-testing, which involved monitoring responses to visuals. Everything from eye-tracking software all the way to saliva count can be used to find out why we naturally choose one product over another without even thinking about it. The appeal of product packaging has the potential to trigger impulsive buying even for consumers who have no intention of making a purchase. Without going too far down the Big Brother rabbit hole, it’s very interesting stuff.

I’ve had my eye on this book for a while. Every Day a Word Surprises Me is a compilation of quotes from the world’s finest writers, researched, curated and designed by Phaidon. As well as brimming with wonderful bits of advice and opinion, it’s also set out in a beautifully simple typographic style that celebrates the content.

Recently, there have been a few news stories regarding social media influencers and some companies casting doubt over their continued use of them as a supplementary marketing method. I’ve unwittingly ended up following a few such influencers (one I started following whilst looking for interiors inspiration) on Instagram and have noticed their feeds becoming increasingly linked to brands. I was therefore interested, both from a business perspective and as a user, how effective this method of marketing is, and I stumbled upon a couple of interesting articles, which I think are worth a read. One details some ecommerce marketing strategies incorporating influencers and the other features infographics of current influencer thinking.

Apple and Google have both recently announced new sets of tools for managing notifications more effectively and reducing the amount of time we spend looking at the black mirror. It got me thinking about how I use my phone on a day-to-day basis and, whilst I’m not ready to go full cold turkey, I did find a nice article on how to make the background noise that little bit quieter.

So I’ve not seen anything lately in the design world that has inspired me. Instead, I've been getting my fix from ceramic artists, illustrators, sculptors and photographers. Someone that never fails to make my mind wander into the sweet abyss is Paolo Del Toro. He makes felt sculptures but his woodwork is mind-blowing, too. Have a looky here. 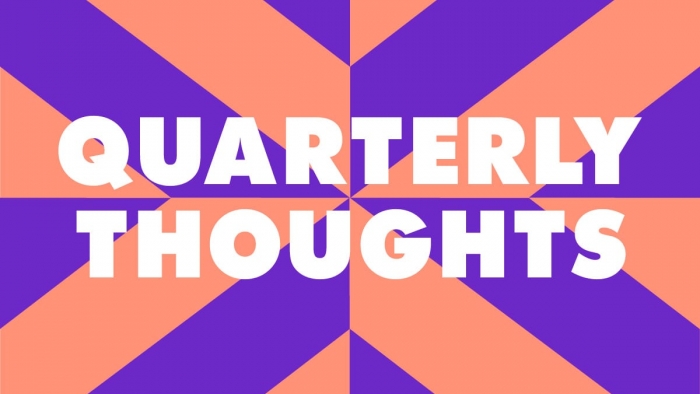